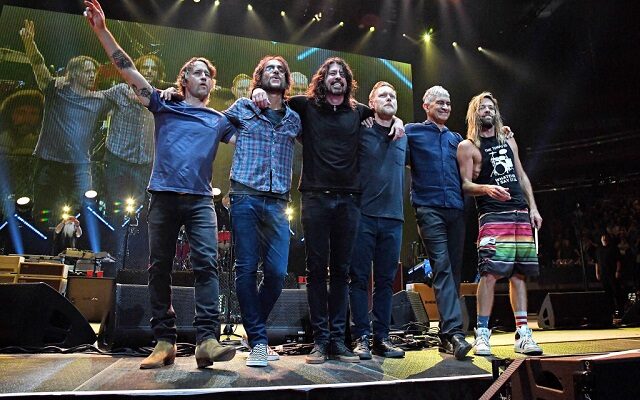 NEW YORK, NEW YORK - JUNE 20: (L-R) Chris Shiflett, Rami Jaffee, Dave Grohl, Nate Mendel, Pat Smear and Taylor Hawkins pose onstage as The Foo Fighters reopen Madison Square Garden on June 20, 2021 in New York City. The concert, with all attendees vaccinated, is the first in a New York arena to be held at full-capacity since March 2020 when the pandemic lead to the closure of live performance venues. (Photo by Kevin Mazur/Getty Images for FF)

*Preliminary reports from Colombian police officials say “the cause of death is yet to be established, according to versions of relatives, the death could be associated with the consumption of narcotic substances.”

The true cause of death will have to wait for the medical officials in Bogota to perform their medical investigation.

Initial reports had the hotel calling for an ambulance after Hawkins complained about chest pains.

By the time doctors arrived Hawkins had passed away.

Hawkins and Foo Fighters were in Colombia to perform at the Festival Estéreo Pìcnic.