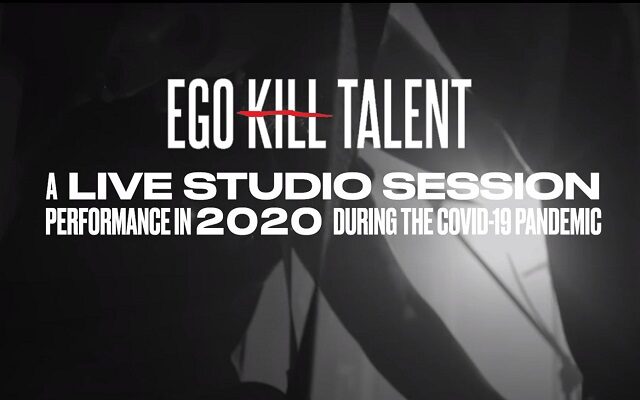 In 2020, Ego Kill Talent — Jonathan Dörr [vocals], Jean Dolabella [drums, guitar], Raphael Miranda [drums, bass], Niper Boaventura [guitar, bass], and Theo Van Der Loo [bass, guitar] — were confirmed for a Spring tour of South America with Metallica and Greta Van Fleet. The band was also set to perform the majority of the Danny Wimmer Presents Festivals in the U.S., to tour with System of a Down in Europe, and to perform at many key European Festivals. All told, EKT had booked 35 shows and 21 key festivals across three continents.

Due to the COVID-19 pandemic and the subsequent global shutdown, the band, like so many others, had to revamp and revise its album release and tour plans.

The band has put together a virtual tour, dubbed “Live on the Flatscreen,” to capture their captivating performances where four or the five members swap instruments. The first show is set for the band’s YouTube Channel on Friday, September 25 at 11pm ET/8pm PT.

Five more dates will be announced shortly in support of the single “The Call” from The Dance Between Extremes, which was recorded at the famed 606 Studio in Los Angeles. The Part 1, The Dance EP features the previously released songs “NOW!” and “Lifeporn.”

ABOUT EGO KILL TALENT:
São Paulo Brazil-based band Ego Kill Talent, who formed in 2014, might be one of the most accomplished “new” artists you’ve never heard of. By fusing heavy riffing with unforgettable hooks and tight songcraft, their music has been streamed over 40 million times as of 2020.

But that’s not all!

Four of the five band members quickly trade instruments amongst themselves mid-performance, making for a thrilling spectacle of a performance. They are also incredibly deft and adept players — they are a true “band’s band.”

They’ve been invited to play major festivals such as Lollapalooza Brazil and Chile and Rock In Rio, amongst others. Google named them one of the top 20 breakthrough acts of 2017.

Ego Kill Talent have also been fortunate to tour with The Foo Fighters, Queens of the Stone Age, System of a Down, Shinedown, and more. Prior to the pandemic, the band was booked for additional 2020 dates with System of A Down, Foo Fighters, and was scheduled to play stadiums with Metallica. Danny Wimmer Presents identified them as a “band to watch” in America and thus confirmed them for many of the Spring and Fall 2020 shows on the festival circuit.

Ego Kill Talent are booked worldwide by William Morris Endeavor and are managed by C3.