The song is a cover of John Cafferty & The Beaver Brown Band’s “On The Dark Side” made famous in the movie Eddie & The Cruisers!

The artist…None other than Corey “Mother Fuckin'” Taylor.

With 84% of the vote, the puffs have it. We heard On the Dark Side by Corey Taylor again.

In addition to the single Corey Taylor is also releasing a new EP.

Here are all the details about the release.

FEBRUARY 11, 2022 – Adding another dimension to his critically acclaimed solo catalog, GRAMMY® Award-winning singer / songwriter, actor, and New York Times Best-Selling Author, Corey Taylor has revealed the details for his new EP CMFB…Sides, arriving Friday February 25, 2022 on Roadrunner Records.  It is available for pre-order and pre-save on all streaming platforms. To herald its release, he has shared the first single, a cover of John Cafferty & The Beaver Brown Band’s “On The Dark Side”—now available on all streaming platforms.

CMFB…Sides comprises nine unreleased B-sides, covers of tunes that inspired the band, acoustic renditions, and live versions. Taylor preserves the windows-down and arena-ready spirit of “On The Dark Side” made famous by John Cafferty & The Beaver Brown Band in the 1983 film Eddie and the Cruisers, and strips the 1981 classic “Lunatic Fringe” by Red Rider down to a striking acoustic number.  Furthermore, he and his cohorts hypercharge “Got To Choose” by Kiss and lock into a punchy punk gallop during “All This And More” from Dead Boys.  Initially recorded for The Metallica Blacklist, the EP also features Taylor’s snarling cover of “Holier Than Thou” from Metallica’s The Black Album. Perhaps most surprisingly, they transform Eddie Money’s “Shakin’” into a roaring banger with all of the original’s swagger intact. Plus, the EP boasts acoustic takes on “Kansas” and “Halfway Down” from Taylor’s 2020 full-length debut, CMFT, and a powerhouse live medley of “Home” and Stone Sour’s famous Come What(ever) May finale “Zzyxz Rd.”  This coming Monday, February 14th, Taylor will release a performance video of the live “Home” / “Zzyxz Rd” medley which was originally filmed during his epic Forum Or Against ‘Em livestream from the iconic Los Angeles venue, The Forum. Fans can visit Taylor’s official YouTube channel on the 14th to watch the performance.

Meanwhile, CMFT also remains another milestone for Taylor. Making history, he reached #1 at Active Rock Radio with his powerful single “Black Eyes Blue.”  The achievement put Taylor in a class all his own, cementing him as the first artist in the history of the format to reach #1 with three separate projects, following chart-topping efforts from his band’s Slipknot and Stone Sour. CMFT made impressive debuts worldwide  at #1 on Billboard’s “Current Hard Rock Albums” chart, while claiming #2 on “Current Rock Albums,” #6 on “Vinyl Albums,” and #9 on the “Top Albums” charts.  Furthermore, CMFT landed Top 10 on the official album charts in Australia, Germany, Switzerland and Austria, with Top 20 debuts in the United Kingdom, Finland and Japan (international chart).

Named one of Loudwire’s “Best Rock + Metal Albums of 2020,” CMFT garnered widespread critical applause with FORBES affirming, “Corey Taylor’s singing is undeniably the best it’s ever been. From Slipknot’s last album to his new solo material, Taylor is easily among the best sounding rock singers alive.” Kerrang! raved, “Corey Taylor certainly couldn’t have predicted how important a sense of uninhibited joy would be on his debut solo effort, it’s just what 2020 needs – and, even more importantly, exactly what he delivers.” The Daily Beast attested, “CMFT finds the singer broadening his horizons and showing off his considerable versatility,” while Stereogum noted, “Corey Taylor’s lived several lives in the span that it takes most of us to push through just one, and it’s clear that he cherishes every experience he’s had so far.” New York Magazine added that CMFT “bridges his vast tastes and influences, dabbling in punk rock, metal, reflective acoustic tunes, plaintive piano ballads, and hip-hop, with Taylor’s power-house vocals and introspective lyrics acting as a guide.”

CMFT is highlighted by the singles “Culture Head,” “HWY 666,” “CMFT Must Be Stopped” [feat. Tech N9ne & Kid Bookie],” and the Active Rock radio hit “Black Eyes Blue.” Taylor hit #1 on Billboard’s “Hard Rock Songwriters” chart following the unprecedented debut of “Black Eyes Blue” and “CMFT Must Be Stopped” [feat. Tech N9ne & Kid Bookie],” the latter of which has racked up 5.5 million YouTube views for its star-studded music video. Furthermore, Taylor debuted the pummeling “Culture Head” during WWE’s NXT broadcast on the USA Network, illuminating yet another facet of CMFT and showcasing the broad spectrum of this fiery and fearless rock ‘n’ roll opus, as Taylor touches on lifelong influences ranging from hard rock to classic rock, punk rock to hip-hop. 14-Time World Champion and EVP of Global Talent Strategy & Development at WWE, Triple H, also shared a WWE exclusive performance of Taylor and his band tearing through the Motorhead classic “Ace of Spades” – Watch it HERE – while “HWY 666” was selected as the theme song for WWE’s Tables, Ladders & Chairs pay-per-view event.

CMFT was a long time coming for Taylor, with newly written tracks alongside some dating back to his teens. Recorded at Hideout Studio in Las Vegas, with producer Jay Ruston and his band—Christian Martucci [guitar], Zach Throne [guitar], Jason Christopher [bass], and Dustin Robert [drums]— the album traces a wild and exhilarating roadmap through Taylor’s musical psyche. 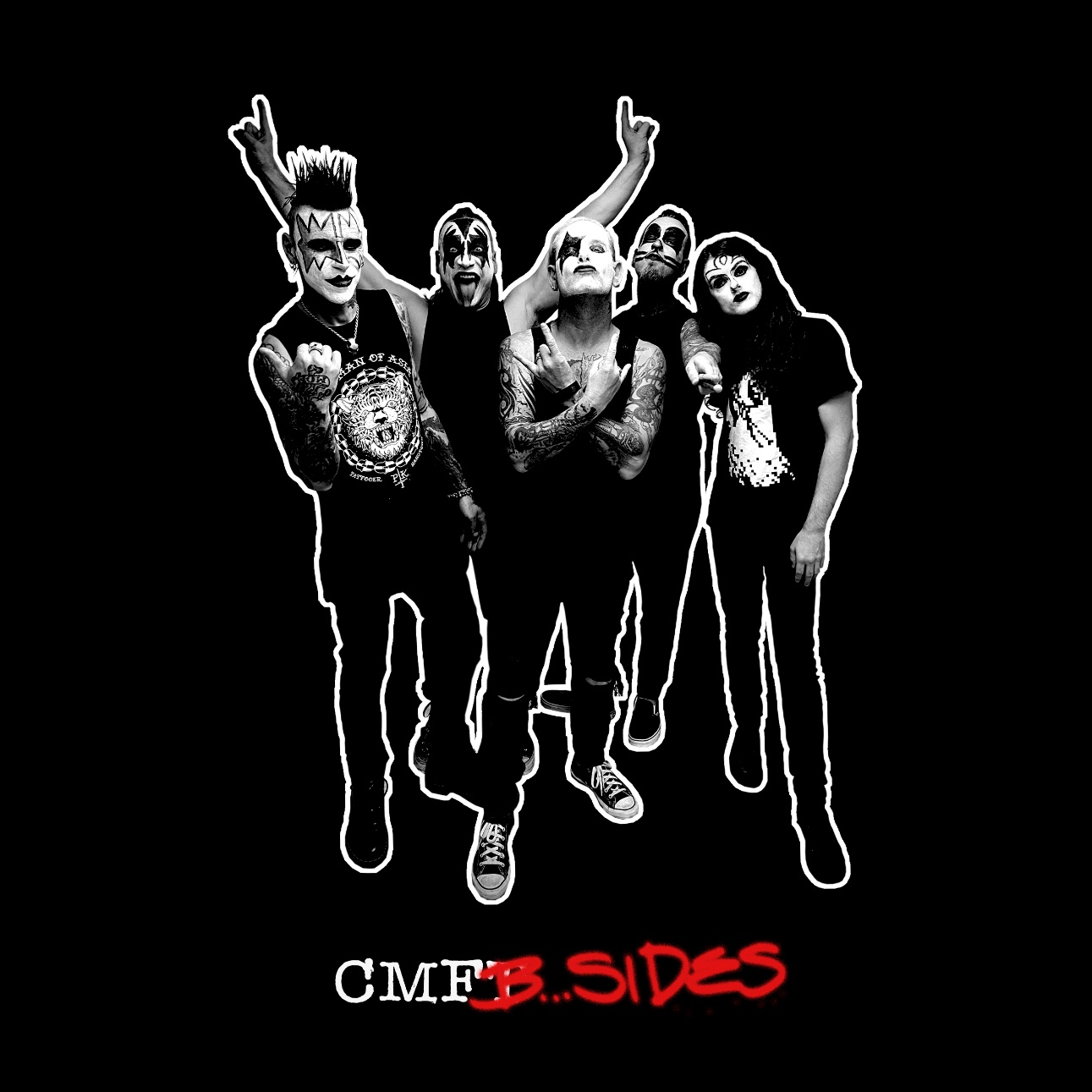 Uncompromising, unfiltered, and undeniable in any arena, Corey Taylor continues to impact culture as the frontman for both GRAMMY® Award-winning multi-platinum juggernaut Slipknot and platinum rock force Stone Sour. Taylor is a New York Times Best-Selling author as well as an actor with a myriad film and television credits. Impacting generations of fans and peers alike, his voice roars across six Slipknot albums which have rallied millions of fans across the globe. With two gold-certified albums and a platinum single, Stone Sour have notched five Top 10 debuts on the “Billboard 200” and garnered Loudwire’s “Rock Album of the Decade” for House of Gold & Bones — Part 1, which also spawned its own Dark Horse Comics graphic novel of the same name by Taylor.  His debut solo effort, CMFT, made history with the powerful single “Black Eyes Blue” reaching #1 at Active Rock Radio making Taylor the first artist in the history of the format to reach #1 with three separate projects, following chart-topping efforts from Slipknot and Stone Sour.  Taylor first crashed the New York Times Best Seller List with Seven Deadly Sins in 2011, occupying the chart for four weeks. He followed it up with three popular tomes: A Funny Thing Happened On The Way To Heaven [2013], You’re Making Me Hate You [2015], and America 51 [2017]. Meanwhile, his filmography encompasses Fear Clinic, Doctor Who, Officer Downe, and Sharknado 4. The rare renaissance man who can give a symposium at Oxford University and headline heavy music festivals around the globe, Taylor forever challenges culture to think, dream, and scream along with him. For more information visit www.thecoreytaylor.com.